As most of you know Stuart and I took the winter off from Keigwin and went to La Rosiere in France to host a ski chalet for the winter. A huge thanks must go to Chiara who held the fort in our absence and looked after the business and guests admirably, our adventure would not have been possible without her.

We were very fortunate to be offered a job with Mountain Heaven a small family run ski company who work in the French Alps. After lots of extra paperwork and a trip to London to pick up our work visas (thanks to Brexit). We were booked to fly out to France on 1st December, thanks to Omicron this was delayed until 13th December. Cancelling flights and rebooking at the last minute and having to get Covid pcr tests, all adding to the stress levels. Eventually we flew to Geneva and met with the rest of the MH 21/22 team, unsurprisingly we were by far the oldest! We all went to La Plagne where the majority of MH chalets are situated, for 10 days training that got condensed into a couple of days. We had Tuesday & Wednesday trying to digest all the information we could and then on Thursday the French Government announced that they would be closing the borders to Brits at midnight on 23rd December. Suddenly the whole season was put into jeopardy again. Would there be a ski season? MH cater predominately for the British market so if Brits couldn’t come could they carry on?

We were all given the Thursday off whilst the managers and owners struggled along with all other ski companies to work out whether they could continue. Stu and I bought a day ski pass for La Plagne, hired skis and got out to blow the cobwebs away.

When we got back and after dinner that evening it had been decided that the company would run the Christmas week of holidays regardless, as everyone they had spoken to who was due to travel had decided to get into France before the borders shut so that they didn’t have to miss their holiday. So the next day Stu, myself, Zoe & Juno the La Rosiere team were driven over to La Ros to start cleaning our chalets in readiness for our first guests. Our chalet had been empty since the out break of Covid and then was shut down in a great rush. luckily a couple of the guys who were allocated the self catering chalets in La Plagne came over to give us a hand, it was all hands on deck to get the chalets clean, made up and food got ready for the guests arriving the following day.

The first guests we welcomed into the Penthouse Chalet were French and like most of our groups to follow consisted of grandparents, their children and grandchildren. Some of the group lived in France but one of the sons and his family lived in South Africa, this was the first time the whole family had been together since the outbreak of Covid so they were all extremely happy to be together. The following week we were the only Mountain Heaven chalet working as our guests were French & Swiss, the rest of the chalets were due to have British guests but because of the closed borders they were unable to travel. All staff were offered to go home until chalets reopened or stay in La Plagne unpaid. Only Juno went back to the UK as she couldn’t afford to stay out unpaid. Zoe went to La Plagne as the owners of the two chalets the girls ran took them back for 3 weeks and let on Airbnb to European guests who could travel.

All the chalets reopened to British guests on 15th January and the winter ski season commenced in earnest. All of our guests were so pleased to be back on skiing holidays after a two year break it didn’t take much to keep them happy. The snow conditions were absolutely brilliant in January and we were blessed with blue skies and sunshine for most of the month. A good dumping of snow every couple of weeks and freezing night time temperatures meant that the pistes were kept in great condition. February brought a mixture of weather but skiing conditions stayed good. In March we experienced our first wind of the winter and Stu and I became fine weather skiers. The wind blew the snow off the pistes making them like ice rinks, so we frequented our favourite bar/restaurant instead of skiing. We also did some walking instead of skiing. One day walking to the top of the mountain to look over into Italy and Mont Blanc. There are dedicated walking tracks in La Rosiere as its a big walking area.  Its so much harder to walk than to ski and we had new respect for the people we had seen previously walking up as we were taking the ski lifts! 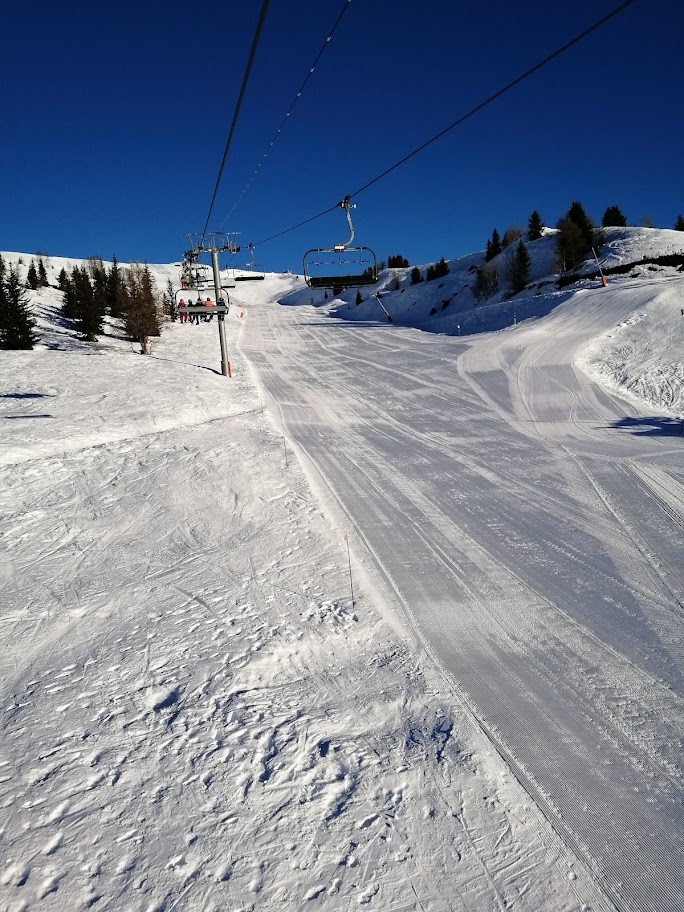 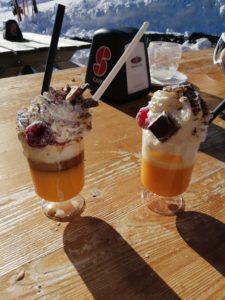 Wednesday was our day off so we would get out early and catch the first lift up the mountain. In La Rosiere the lifts opened at 9am but people would be queuing from 8.45. If the weather was good we would aim to ski into Italy and could be sat in our favourite Italian bar/cafe in 45 minutes having a coffee, breakfast and or a bombardino. For those who have never had a bombardino its a real soul warming drink consisting of a shot of brandy, heated advocaat topped with whipped cream and decorated with fruit and a chunk of chocolate. Sometimes it also has a shot of coffee. In the photo above the left hand one has the coffee and the right hand one is unadulterated bliss. 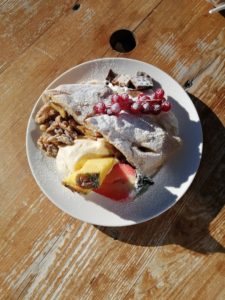 All in all we had a great experience hosting a ski chalet in the French Alps for the winter. We met some lovely people and had the chance to ski everyday for four months. Yes we would do it again, but not this winter, we need a holiday ourselves

Below the view from l’Antigel our favourite bar/restaurant on the slopes in La Rosiere.